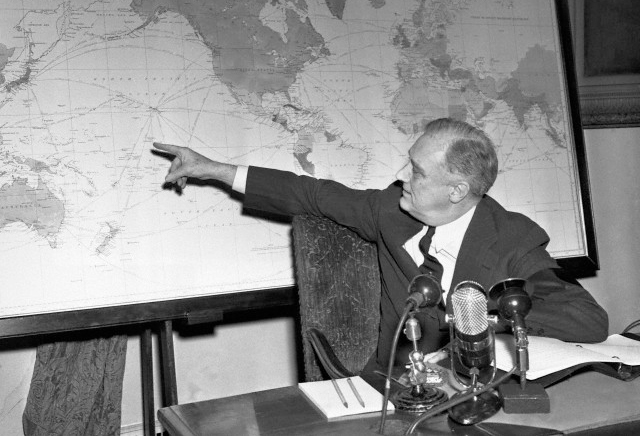 In February, 1942 President Franklin D. Roosevelt asked Americans to get a world map before his "Fireside chat" heard over the radio. He said, "I'm going to speak about strange places that many have never heard of ... places that are now the battleground for civilization." Photo from the Library of Congress and Wikimedia Commons.

The Germans had a song from a poem called
“Wir fahren gegen Engeland.”
In English this meant “We move against England.”
It was about a German sailor from World War I
who romantically had
one last drink with his comrades,
kissed his girlfriend goodbye, then ventured
off heroically to fight
the English.

The song became a rousing, upbeat tune, a march
designed to encourage the soldiers on to yet another
quick and spectacular victory
for the Wehrmacht, the German arms forces,
and the Kriegsmarine, the German Navy.

After defeating and occupying Poland, Denmark, Norway,
Belgium, Holland, and most impressively, France in a
Lightning War called Blitzkrieg, the Germans must have
felt invincible. The Germans' song about attacking
England seemed a perfect fit.

Since September of 1939 until June of 1940, the Nazi armies
had seen nothing but victory. The Soviet Union, a potential
enemy Hitler hated and feared, had suddenly been
neutralized by Hitler's cynical diplomacy, a mutual
non-aggression pact. Stalin and Hitler were now, more or
less, at peace with each other. Poland and France,
Hitler's enemies in the war so far, were both defeated.
Only Britain was left.

The British Army and some French troops were
miraculously evacuated at Dunkirk and brought back
to England. The soldiers were saved, but their heavy
equipment was lost, and the troops were beaten down
and demoralized.

All that stood between the Germans and a likely British
defeat, it seemed, was the treacherous English Channel
and a stubborn and defiant British leader named
Winston Churchill.

Operation Sealion was the German plan to invade
England. Hitler always had his mind on the East; he
wanted what he called Lebensraum or living space
for Germany, vast lands, resources, and enslaved
populations for Germany’s expansion. He wanted,
therefore, to attack Russia.

But now Hitler in the summer of 1940 was facing
England alone.

Hitler was hesitant to invade Britain, wanting instead
a negotiated peace whereby Britain would give Germany
a free hand in Europe and become something of an ally,
a puppet, or at least a neutral of Germany’s.

But Hitler would not get a puppet in Winston Churchill who
vowed to “fight on the beaches” to the very end. So,
Hitler allowed for the initial steps of Sealion to go forth.

On July 16, 1940 Hitler ordered his military commanders to
draw up plans for the amphibious invasion of Britain called
in German Seelowe or in English Sealion. It would be
incredibly complex involving air, sea, and ground forces.
Target date for Sealion was September 15. This gave the
Germans only two months to prepare.
By October the weather and
seas in the English Channel would be so rough that an
amphibious invasion would be out of the question.

So while the German soldiers sang their song about moving
against England, the Luftwaffe (German air Force) and the
Kriegsmarine (German Navy) had to clear the way for
invasion.

The Battle of Britain

Hermann Goering (also spelled in German as Goring with
an umlaut on the “o”) was the head of the Luftwaffe, the
German air force. He had been a daring pilot in World
War I but was a braggart. He endlessly exaggerated his
importance and the ability of the Luftwaffe. Indeed, the
German air force had succeeded in Poland, Norway, the
Lowlands, and France, performing superbly as a tactical
support for German ground troops.

The Luftwaffe was a
key part of the Blitzkrieg -- which was an attack concentrated
at a key point by a breakthrough combination of air power,
tanks and armored vehicles, and artillery fire, followed by
infantry.

The Luftwaffe had destroyed enemy planes in the air
and on the ground and wrecked enemy air bases.
But when Hitler and Goering began the Battle of Britain
on August 15, 1940, a battle fought totally in the air, it
was a different story.

Now the Germans, who did not possess a four engine,
long range bomber like the American B17 but only had
medium, two engine bombers, had to achieve air
superiority and even air supremacy in order for
Sealion to prevail.

Air superiority is a military term meaning to have greater
air power than the enemy. Air supremacy is a higher
condition where one’s air power is effectively
unchallenged by the
enemy. The Germans should have gotten air supremacy before invading,
but air superiority was at the very least essential for invasion.

On August 15, named Eagle Day by the Germans,
massive numbers of German bombers and fighters, about
1000 planes in all, flew against England. There had been
prior to this some limited German attacks on British
shipping in the English Channel, but now a giant air
Armada was launched directly against English soil.

The targets were airfields, radar stations, and even
aircraft factories. But the real target was the Royal Air
Force (RAF) Fighter Command itself. Goering wanted to
destroy the RAF in one attack. But at the end of the day,
the Germans lost 75 air planes to 34 for the British.

The Germans outnumbered the British, but they could not
afford to lose such numbers. The Germans faced
several problems. First, their planes had to fly from
bases in occupied France across the Channel to
targets inside England. The RAF, however, was
already at the targets. The British planes could stay
in the air while the Germans, especially the fighter
planes, had to return to base for lack of fuel.

Secondly, the German bombers, being only medium
with two engines, had limited range and limited bomb
loads. They also had only a few
machine guns for protection.

German planes were now no longer supporting ground
attacks as earlier in the war but were conducting
strategic bombing (attacking infrastructure --
airfields, radar and communication centers, etc),
something these planes were
not designed for.

The Stuka, the Heinkel HE 111,
the Dornier DO 17, the Junkers JU 88, and the
Messerschmitt ME 110, all good
bombers earlier in the war, now found themselves
beingmauled by the Hawker Hurricanes of the
RAF and especially by the outstanding British
fighter called the Spitfire.

The Germans had an excellent fighter plane called
the Messerschmitt 109 or ME 109, a.k.a. BF 109, but it
had limited range and air time because of the distance
to targets and fuel issues.

The Germans had the numbers, but the British had
the home field advantage and excellent fighter planes.

Nevertheless, had Goering and Hitler continued to bomb
the air fields and bases and aircraft factories, the
Germans might have reduced RAF Fighter Command
to the point of gaining German air superiority. They may
have also driven the British bases further away from the
coast, making them less able to deal with a cross
channel invasion.

Instead, because Churchill had Bomber Command
bomb Berlin, the Nazis retaliated by bombing London.
This was known as “the Blitz” of London. Although this
was destructive and terrifying, it was an extremely foolish
move militarily for the Germans. Not only did the Luftwaffe
lose planes, but now the British had time to rebuild and
repair air bases and airfields ... and even build new planes.

The inadequate German bombers and the strategic missions they
were not intended for, plus foolish decisions by Hitler
and Goering, such as bombing London by day,
and continuing bombing by night when daylight
raids proved too costly, plus outstanding efforts
by RAF Fighter Command, and a resolute Winston
Churchill resulted in a defeat for Germany in
the air Battle of Britain.

The German Navy -- consisting mainly of U-Boats
and a few surface ships and being no match for the
Royal Navy which had many destroyers, cruisers,
and battleships -- could not possibly protect an invasion
fleet using improvised barges as landing craft.

Could Sealion have Worked?

In 1974 the British Royal Military Academy at Sandhurst
conducted a wargame to test the feasibility of Sealion.
They concluded that with air power properly used,
with paratroops, and a screen of sea mines and the
best use of the Kriegsmarine and U-Boats, the Germans
could possibly land troops in Southeast England.

But the Royal Navy would be powerful enough to
stop any second wave of landings and thereby cut
off the German supply line. German troops in England
would be without “beans, bullets, and bandages” -- no food,
ammunition, or medical supplies. As a result the Germans
would die or surrender on land. The Royal Navy would sink
German supply and troop ships at sea.
The result would be a German defeat.

But the odds were that Sealion would fail.

So, much like Napoleon had done a century before,
Hitler turned Eastward to attack Russia instead.

Posted by Adrian McGrath at 2:17 PM

This journal will discuss the major topics relating to World War 2 (1939 to 1945). It will occasionally discuss key topics from World War 1 (1914 to 1918) and the interim years (1919 to 1939) because of their influence on the second war. World War 2 was the largest and most destructive war in human history. Its impact affects us to this day. We must never forget the brave men and women who fought against tyranny.

This journal is dedicated to the memory of my mother and father, Isabella and John McGrath who lived during the war years.

About the journal's author 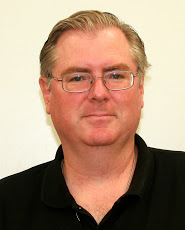